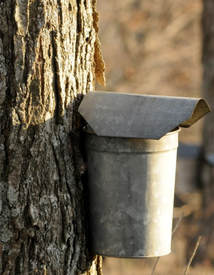 ​Did you know that although Europeans knew how to tap trees, it was the American Indian who discovered how to make maple syrup?

Indians from New England to Canada were producing maple syrup from 1664. The Indians made a sloping cut, or gash, two inches deep and 2-1/2 inches long, in the side of a tree.
A knife or wood chip was put into the bottom of the cut so the sap flowed down the cut, onto the knife and into a receptacle on the ground. The receptacles were made either of bark caulked with pitch or hollowed out logs.

Spiles are used to direct the flow of sap from the trunk. Originally they were wooden, then the Eureka sap spout, made of galvanized cast iron, took over. It was replaced by metal spiles and buckets and also plastic spiles for plastic or polyethylene tubing.
By 1950, the present day tapping was accepted.  The Indians used a basket or tub from hollowed out tree bark as a collecting receptacle. They were placed on the snow or ground at the base of the tree. Troughs were used by the colonists until the late 1840's.

Wooden buckets or pails were introduced as early as 1748, but weren't common until much later. Wooden buckets were still used in 1935; then they were replaced by tin-plated buckets because the wooden buckets dried out and leaked if they weren't painted every year. Bucket covers have been used since 1870 to keep leaves and debris out. Plastic tubing, used since 1965, takes sap directly to a gathering vat or storage tank.