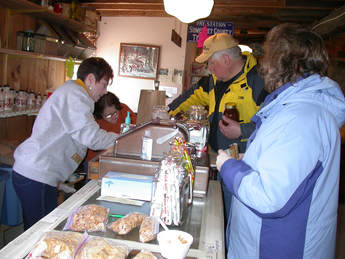 The Country Store is a part of rural life that older folks fondly remember.  Our Country Store has been an integral part of the Pennsylvania Maple Festival since 1968 selling all types of maple products and souvenirs.

The growth process of the store was slow because items needed to give it authenticity were extremely hard to come by. All of this changed in 1982 with the closing of a small neighborhood store just south of Meyersdale.  The W. W. Nicholson Store was a local general merchandising emporium along Route 219 established by William W. Nicholson in 1902. This general store served the many families who worked the local mines and coke ovens. The Nicholson family continued to operate this same establishment until August 1982 when, with the passing of Mr. Nicholson's youngest daughter, its doors were closed for the last time.

The Nicholson heirs were very generous in their support and donations to the Maple Festival's Country Store. The glass display cases and the large-lettered wooden outdoor sign were gifts of the Nicholson heirs to link indelibly the Nicholson name with Meyersdale. At a public auction in October 1982 the Maple Festival purchased scores of other items to further enhance the Country Store.
​
Since 1983 we have given visitors a look back to the early part of the century. Browse in the Store and take in the atmosphere of an age that has passed into history. Munch on a dill pickle or an apple from the barrel or try some of the penny candy, country sausage, maple products, homemade bread, apple butter, dried fruits and vegetables which are still the specialties of the establishment. In addition, we also display and sell souvenirs.